100 years ago the Rev Samuel Trexler traveled by train from New York City to Ithaca, NY and to Syracuse, NY to establish Lutheran Campus Ministries. Campus ministry at Syracuse along with Columbia and Cornell founded by this circuit-riding preacher, teacher and organizer is the second site of Lutheran Campus Ministry in the United States.

The Lutheran church in 1910 experienced a major crisis in leadership. A committee of three pastors (William M, Horn, F.B. Clausen, and Samuel Trexler) was quickly formed to research the problem. The committee concluded that “Potential leaders are being lost to the church because no attempt is being made to reach our young people in non-church institutions of learning, a rich field, properly cultivated, in which to recruit men for the ministry.” The committee strongly urged the Synod to call a pastor whose sole duty would be to minister to the student in colleges and universities in New York and New England. This report was received favorably, and the committee was asked to call this “Lutheran Student’s Pastor”. Fortunately, the committee had someone in mind for the job, its chairperson, Samuel Trexler. His intelligence, courage, leadership, and confidence in young adults made him a natural choice. He was stunned by the committee’s decision; he had never thought of himself for this position. After consulting several other pastors, he prayed about this position and a growing sense of assurance made him realize that God was calling him to the “Student Pastorate”. He took the position and was installed as the “Student’s Pastor” on December 11, 1912.

Here at Syracuse, Chancellor William Day was extremely helpful, pledging his support and assisting Trexler in getting names of Lutheran students. At Syracuse Trexler made his headquarters at his own fraternity house, Phi Gamma Delta, from which he wrote happily of “reliving student days”. He organized a Lutheran club, although this did not receive recognition until 1920, and invited noteworthy leaders to meet with students. He served in the position of “Student’s Pastor” for two years. After WWII Syracuse University honored him for his life’s work in church leadership and for the work he did on behalf of their students.

Today the purpose of the Lutheran Campus Ministry is broader; helping young people sort out their career path and lifestyle. Campus Ministry puts God in the equation as they think about their gifts and talents. It nurtures leaders for the workplace, our homes, our neighborhoods, and our global community as well as for the ordained ministry and for leadership roles in congregations.

As the following newspaper article shows, LCM’s programs have always been on the cutting edge; challenging students to think and share God’s unconditional love.

The LCM 100 logo is specially designed for the 100th year anniversary of Lutheran Campus Ministry at Syracuse University and SUNY ESF. The main part of the logo is a transformation of the word “LCM” and the number “100,” standing for the celebration of the 100th year anniversary of Lutheran Campus Ministry. The letter “M,” or the second “0,” looks like a heart, symbolizing LCM’s spirits of hospitality, forgiveness and enthusiasm. Orange is the dominant color of the logo and also the color of Syracuse University. It means that LCM is a student-centered community, nurturing student leadership and maximizing student potential. Finally, SU’s logo and SUNY ESF’s logo are also included in the design, showing the mission of LCM is based in the two excellent universities. 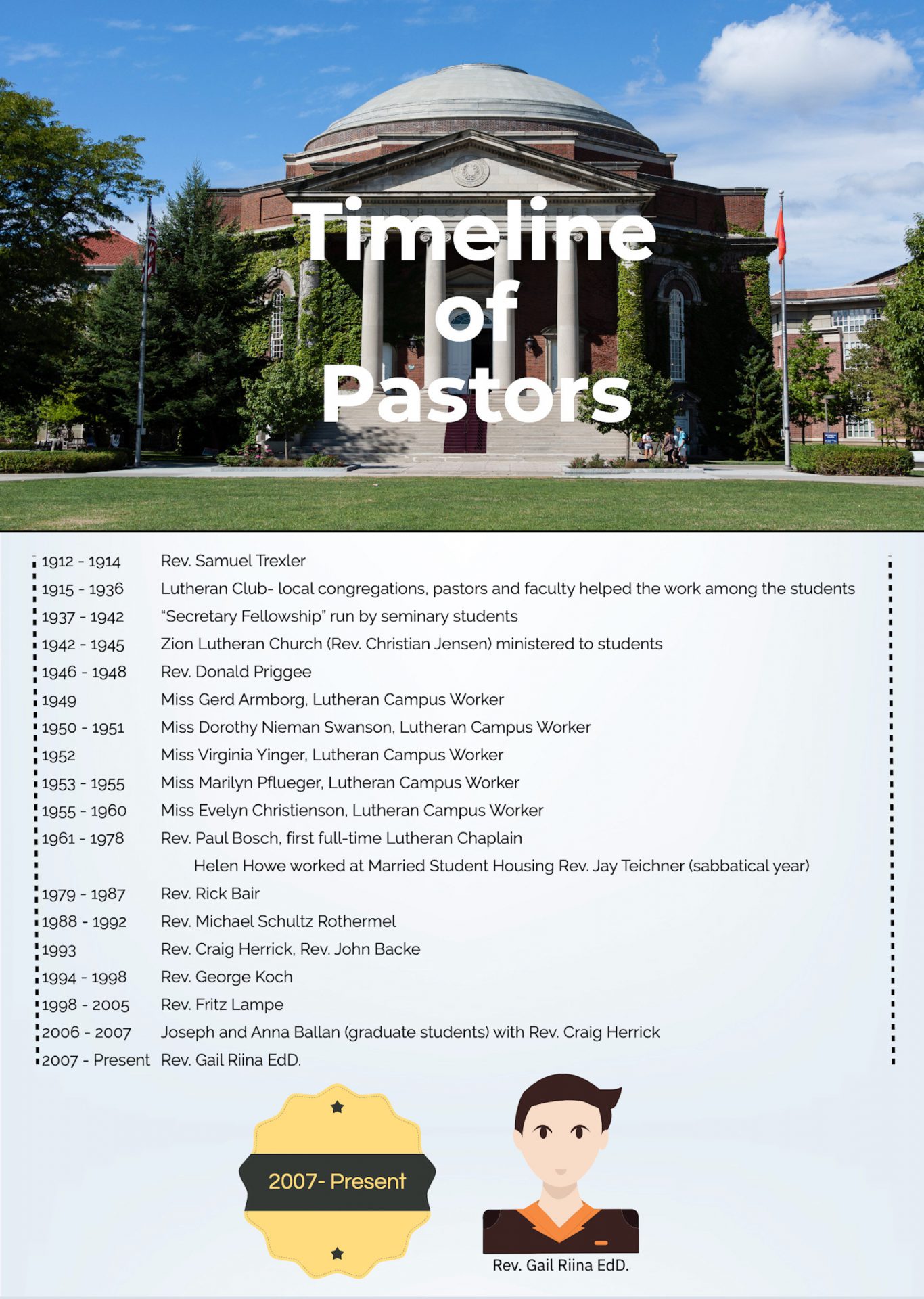